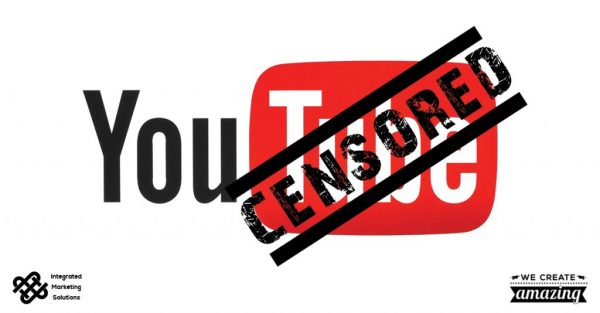 YouTube has become the third-largest website on Earth, a goliath viewed by millions each day. It’s also now apparently “over” — or at the beginning of the end — according to a group of disgruntled YouTubers who claim the company has begun censoring them.

The big hoo-hah arises from misunderstandings over YouTube’s long-standing policy of disabling ads on videos that could draw advertiser complaints. And for obvious reasons, such as videos that are violent, sexually suggestive, or that contain drug use or bad language.

In the past, YouTube has hidden demonetization notifications in its video analytics dashboard so that creators never saw them, however the company recently began sending notices by email and alerting them directly on video pages. This has caught several YouTubers by surprise, who have taken to social media with the hashtag #YouTubeIsOverParty. They exclaim that, without them, YouTube would have no content on which to advertise on top of.

Ironically, the change is part of YouTube’s ongoing efforts to be more transparent in its dealings with creators, and was actually designed to make it easier for YouTubers to appeal bad blacklistings with a simple, “Review my video again. I believe it’s advertiser-friendly.”

Still, many YouTubers have raised valid concerns about what YouTube considers “advertiser-friendly” in the first place. It’s hard to argue with an advertiser who doesn’t want his product placed next to something dodgy, it’s no different from conventional media. Brands cherry-pick the shows they advertise with very strategically, and pull those ads post-haste if the show gets mixed up in anything dicey.

We as advertisers only want the best for our clients, so if a few YouTubers have to be mindful of their content in order to receive monetary gains from them, so be it. Only time will tell if YouTube will revise its ad policy in light of all the outrage.

«
Is getting social an organisations social blunder?»
Becoming the mastermind of social media metrics!

According to Accenture's "Why Shopping's Set for a Social Revolution" report, social commerce will grow three times as fast as
Keep Reading

Instagram has been a staple in the marketing strategy of many marketers for years now, and for a good reason.
Keep Reading
By using this website, you agree to our use of cookies. We use cookies to provide you with a great experience and to help our website run effectively.
Accept
Manage consent